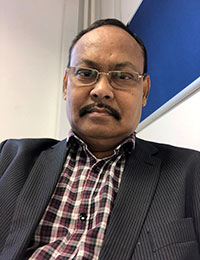 Role in the University

Gladius has a practitioner background, having initiated and led several businesses, NGOs and social enterprises and holding top management positions such as MD, CEO, COO etc. in the private, public and voluntary sectors in Asia and Europe. Gladius has specialism, expertise, and experience in Business and Social Innovation, Business and Social Entrepreneurship, Organisational Development/Leadership,
Social theory and Business Ethics as an educator, researcher and facilitator.

Gladius is also an expert in Higher Education course design, having created a BA in Social Enterprise, the very first kind of it globally; as well as an MA in Social Enterprise (Health & Social Care) at the University of East London. His skill sets include filmmaking and television production, having made mainstream movies in South India and executive producing prime time English TV drama in Singapore.

Gladius led the BA Social Enterprise programme, also known as "Communiversity", at the University of East London, leading on it as the Programme Leader for ten years. This unique programme, delivered in collaboration with the leading social enterprise in East London, the Bromley by Bow Centre, worked with community workers across London and built their capacity to initiate, set up, and operate businesses and social enterprises across the different boroughs of London. The focus was on creating routes for upward mobility for marginalised groups through social innovation. Many of these social enterprises have become extremely successful, generating sustainable livelihoods for marginalised people locally and winning national awards.

Gladius has conducted numerous training sessions in Denmark as part of the Centre for Social Entrepreneurship, Roskilde University’s Capacity Building Initiative resulting in the upskilling of various minority business and social entrepreneurs in the Copenhagen area. He has supervised PG students on their dissertations and is currently supervising DBA students.

Gladius obtained his PhD in Social Entrepreneurship from Roskilde University, Denmark. He has published numerous articles on innovation and entrepreneurship in academic journals; besides presenting research findings at various International conferences across the globe.

Gladius is a member of the Board of Directors for Rock Foundation (a private Limited Company involved in low cost housing in Madurai, India). He is also a Director of BLC Trading Limited, UK (a Fair Trade organisation promoting of ethically sourced natural and organic plant-based ingredients for cosmetic products).

Gladius has provided consultancy for enterprises such as:

Articles and chapters in edited books:

Chair of Trustees: Skills Enterprise, Newham Borough, London (Charity working with immigrants and socially excluded groups; Offering training to youth in Coding and Robotics; Advice and Guidance for those on benefits)

Chairman, Jiffy Grills, a Social Enterprise in South India (A restaurant designed as a cooperative with ex-offenders and ex-addicts)